A Hands on Background 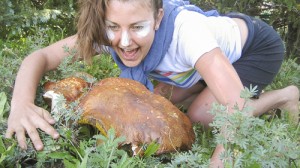 A hiker finds a very large Bolete in Southwestern Colorado.

Every day we use our body, and our senses to both navigate and relate to the world. Doug Simmons, a versed edible and medicinal plant specialist always encouraged us to get get really close and interact with plants when learning about a new plant species. Start by visually investigating them. learning their distinct features, then touching them. Also smelling them, as smell is one of the hardest senses to fool. Then if you’re confident it’s not a poisonous variety, taste it. And over time, through seasons of interacting with these plants we develop a relationship with them. That being said, there are no recommended times a beginner (less than two seasons experience) should taste a plant or mushroom in the field with out someone experienced with them. It’s also important to note that mushrooms are very different than plants as there are a significantly higher percentage of mushrooms that are toxic when consumed than plants.

In the beginning stages of learning, it’s very important to emphasize the visual sense… If pursuing knowledge about wild plants or fungus, learn to visually identify the poisonous and toxic species in your area first! Then explore your environment with more confidence, knowing who not to bother, who not to eat, who not to touch (think Poison Ivy, or Stinging Nettles). 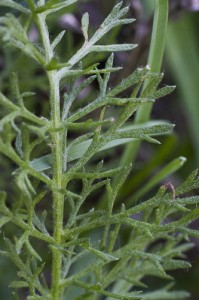 Yarrow has a fairly distinct shape, but a much more distinct smell

On one occasion this technique of “interacting” or relating to the plants I was studying, helped me identify plants that were previously mis-identified for a scientific research project. One summer, I was assisting a team studying in the San Juan Mountains underneath a botanist. The plants the team was studying were a species of Geum,  all very small as they reside in the alpine tundra, roughly 12,000′ in elevation. When I sat down next to the plots set up by the research students, I noticed that a significant portion of the plants labeled as “Geums” were actually Yarrow (achillea millefolium)… When quickly comparing both plants visually, this is an easy mistake. But, when quickly smelling the two species, it’s a dead give away. Yarrow has a distinct aroma. I had reached out and rubbed the “Geum” between my fingers, and then brought them up to my nose and found out yarrow had invited itself to the party!

This method and practice of getting close and interacting with plants helps me every time I relate to a plant of fungi. Another could have saved me from a plant poisoning. On a day hike looking for herbs I came across a patch of what I thought to be Fireweed (Evening Primrose Family – Onagraceae). But, it was early on in the summer, the plants were about as tall as my waist, and had not yet dawned their beautiful pink flowers… the pink flowers were  how I visually knew Fireweed best.  But, also knowing that I enjoy the spicy-mustardy-green taste of Fireweed, I pinched off a small tip of a this leaf and tasted it on the tip of my tongue… not Fireweed. What ever it was, I did not taste right, and shamelessly spit out the tiny tiny amount of green pulp. Laughing because of how clearly a no, I got when asking my sense of taste if this is Fireweed. 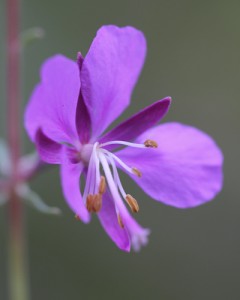 Fireweed has distinct arrangements of purple flowers and a peppery taste

I found the same look-a-like when hiking later that season. This time it was blooming though and had yellow aster-like flowers. I looked it up and discerned it was likely a toxic variety of Senesio. Confirmed. Not Fireweed. No one was poisoned. I expanding my experiential knowledge and now I’m familiar with another variety in our region. In fact every time I see a stand of this yellow aster, I go and say hello.

Another family of plants to relate to. Which brings me to what I will reflect on next.

Building relationships with plants and fungi.