Gettin’ Down in Delhi

Jet lag is an interesting phenomena. I heard once that when one travels to a distant place very quickly, that it takes a while for your soul to catch up with you. I’m not sure about my soul yet… but, my body was definitely a bit aggravated being tossed on the other side of the planet so quickly.

I successfully made it to Majnu-ka-tilla, which is the Tibetan district of New Delhi without incident on Thursday after a 23 hr travel time and about as much sleep as one could expect on a 15 hr plane flight. After a little chaos I found a guest house in the small haphazard community, which is essentially a conglomeration of four-story buildings and dingy alleyways that border  a busy highway in north Delhi. The dirt alleyways are dark and congested with bicycle rickshaws hauling bricks and other building supplies, street vendors, chai wallas, and peculiar little touts holding cotton swabs that offer to clean your ears (they will even do the first one free as a trial). To avoid having to repeatedly declining the ear-cleaners offers and to get over my jet lag, I spent most of the first day in Delhi in my room. This process included trying to not pass out on the floor of my room at 3:00 in the afternoon and then trying not to pace around the patio of the of the guest house at 3:00 in the morning, my body telling me it wants a hot americano.

On my second day in Delhi I was feeling a bit more coherent and adventurous. After consulting one of the locals that worked in the guest house as to where the nearest metro station was, I jumped into a bycicle rickshaw and headed out.

The packed metro spit me out in the bustling and very modern city-center of Delhi. After running some errands in Rajiv Chowk, a rather large plaza/mall area, I saw a colorful sign for a music shop. Refusing to give up an opportunity to talk music with someone I walked through the door and up the narrow concrete stairs and found a small alcove in which there were dozens of sitars, harmoniums, tablas, guitars and a young Indian man named Ashish.

Within 5 minutes me and Ashish were talking music, laughing and taking turns playing songs on one of his guitars. As a student studying music at a university in Delhi, Ashish’s English was very good and we found much to talk about. He also could play the Sitar very well. Soon after I arrived his uncle showed up, Mr. Malik, whom was an expert Tabla player. We spent the next three hours playing music, talking and drinking Chai.

It is amazing what being open to a bit of spontaneity and new experiences will do. 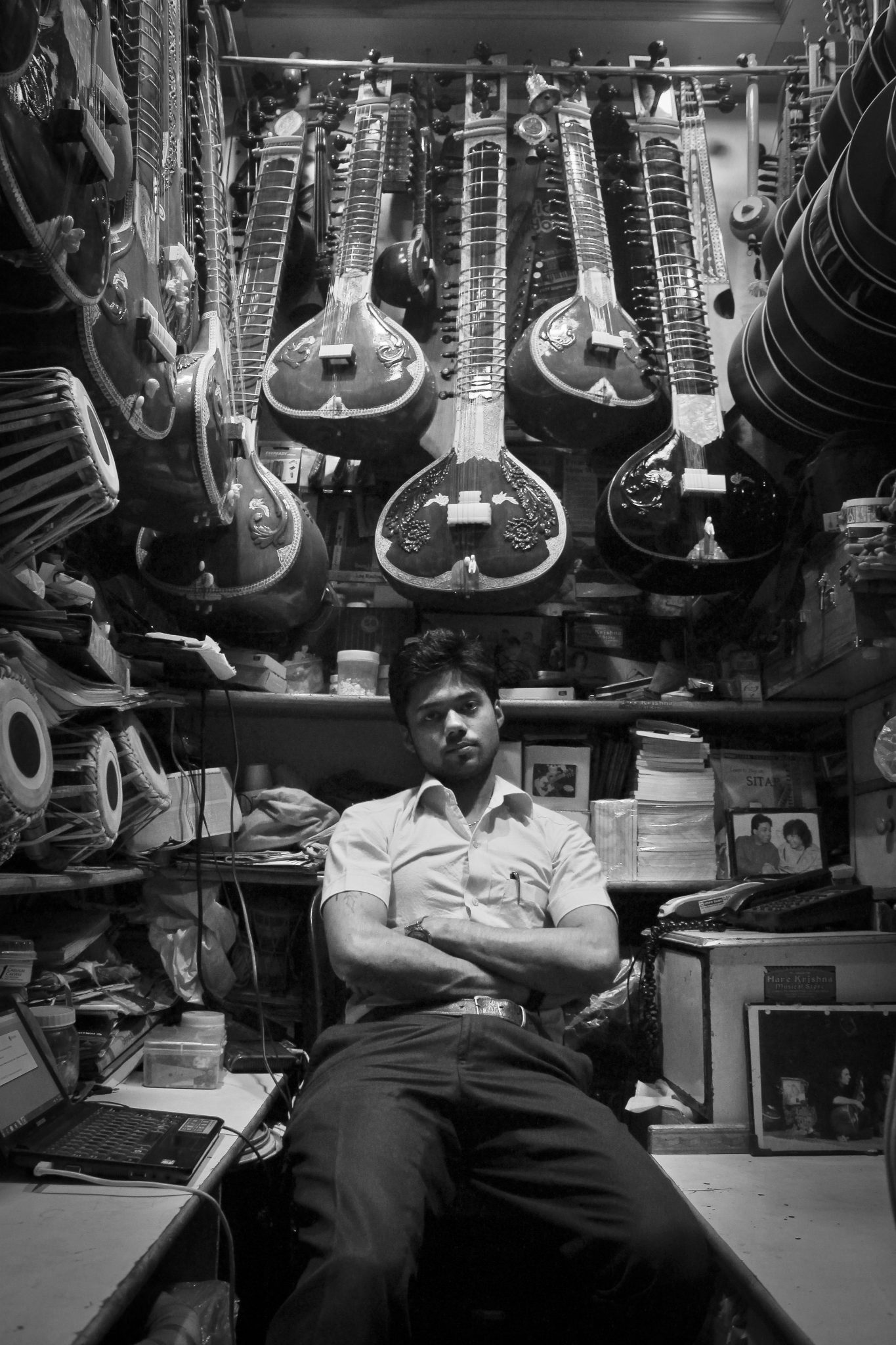 Above: Ashish of Hare Krishna Music posing for a photo in his store.