The Crux – The Kashmir Analogs: Part 5 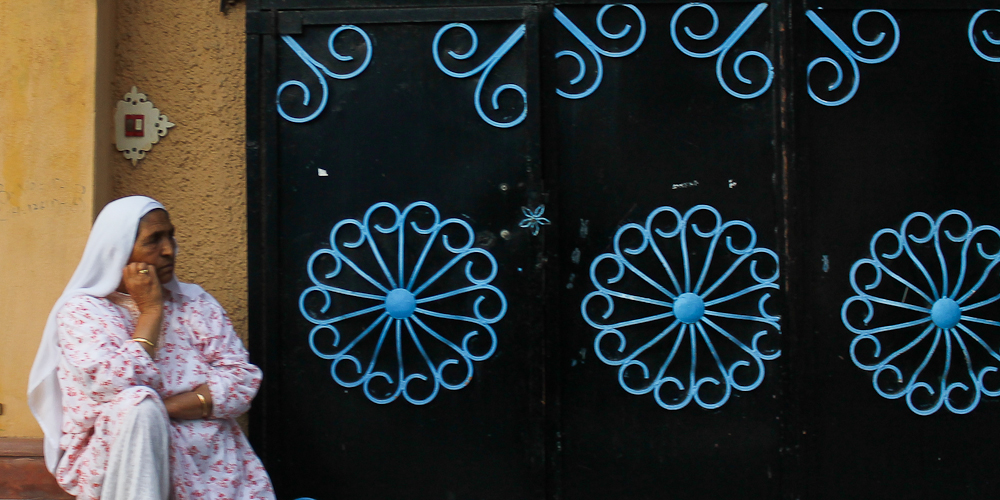 Here we are at the Crux. The Crux being the move we take to make it all come together… all coalesce…  It’s been seven weeks since I started posting The Kashmir Analogs. Traveling and working in Kashmir was a journey for sure. And so far, I’ve only told stories about my trip. This post, The Crux, contains some of my thoughts about these experiences and the stories I’m telling you….

Although, the situation Kashmiri’s face may seem bleak and negative, this is very much reality for them. Although I profess the humans rights abuses in India, I in no way want to discredit or talk badly about the Indian people. India is an amazing country… boasted to be the largest democracy on the planet… because of that I’m having trouble processing these experiences …So much so, that it is hard to put it into words… I was shown nothing but courtesy, care and amazing hospitality from everyone I met in India, regardless of their class, background or religion.

“But then, how do I make sense out of the oppression I saw in Kashmir?” 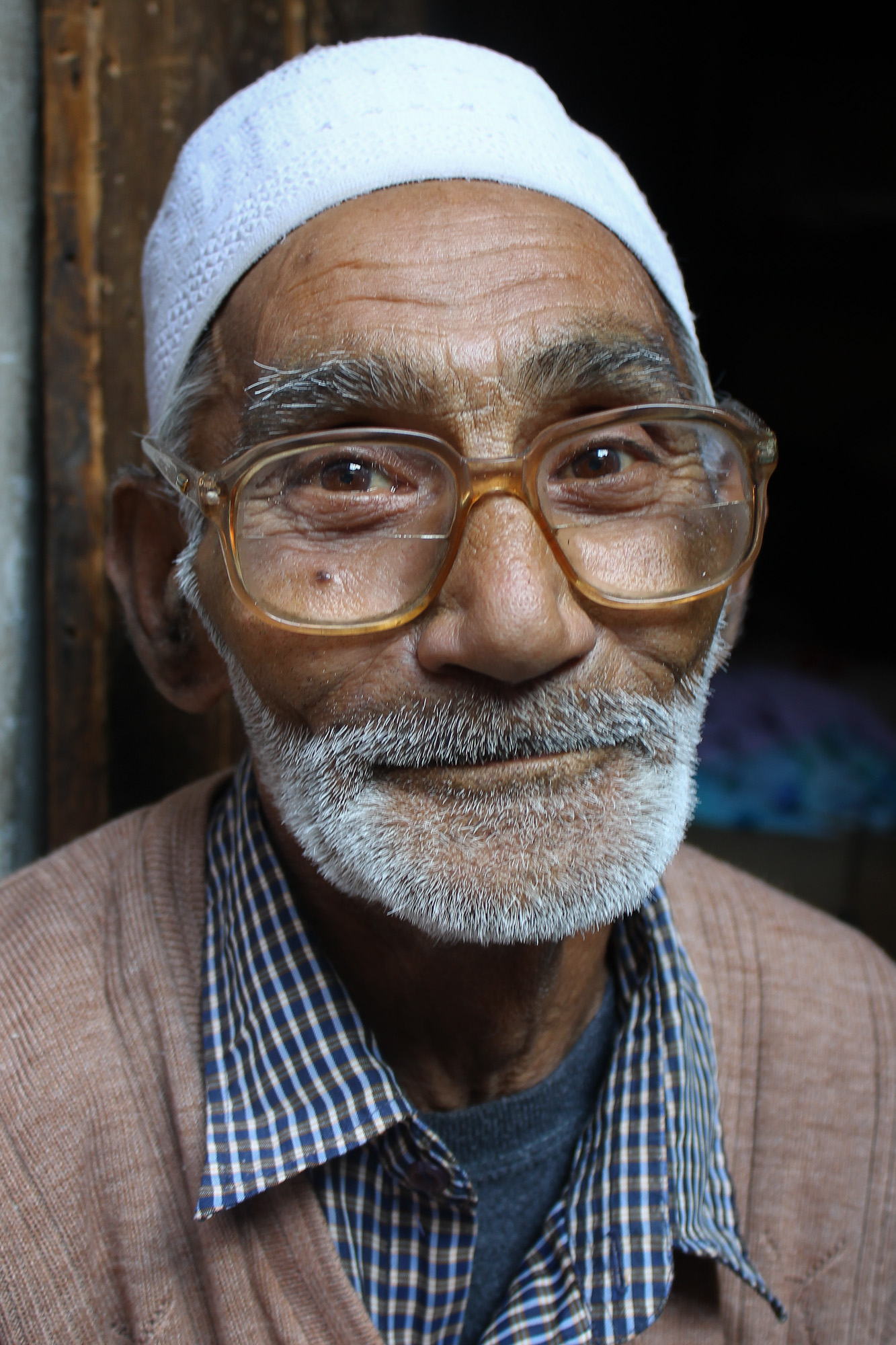 Man we met while walking in the neighborhood markets of Srinagar, Kashmir

Going back to my statement at the introduction to this series, about how misinformed and misled I was by the media research I did before I left for Kashmir. The situation in Kashmir was painted –  and my own preconceptions led this –  to be a religious conflict… Differences between Hindu’s and Muslims…. that have been going on “forever“.

After visiting Kashmir and talking to people from all walks of life, that is not the story that I heard at all. My experiences traveling have taught me that The People do not fight over religion. To-date, that has been one of the most limiting and detrimental fallacies of human thought…

“Fanatics fight through religion to attain the tainted fruit of power and immortality.

The people live their lives…

Those piloting the institutions, capitalize on their own populace’s ignorance, or differences and unknowns between themselves and others to puppeteer their own,

Some individuals are led astray by the stories charismatic leaders paint before their eyes… Others, by flashing screens and handhelds, that in a tenth of second, plant a seed that sways their judgment of themselves and others…

Ignorance is an illness that effects people of all skin colors, all religions,

all ages, all genders and all classes…

…money and power may not be the cause of ignorance, but, do they increase susceptibility? What else increases it?

How do we as The People combat ignorance?” 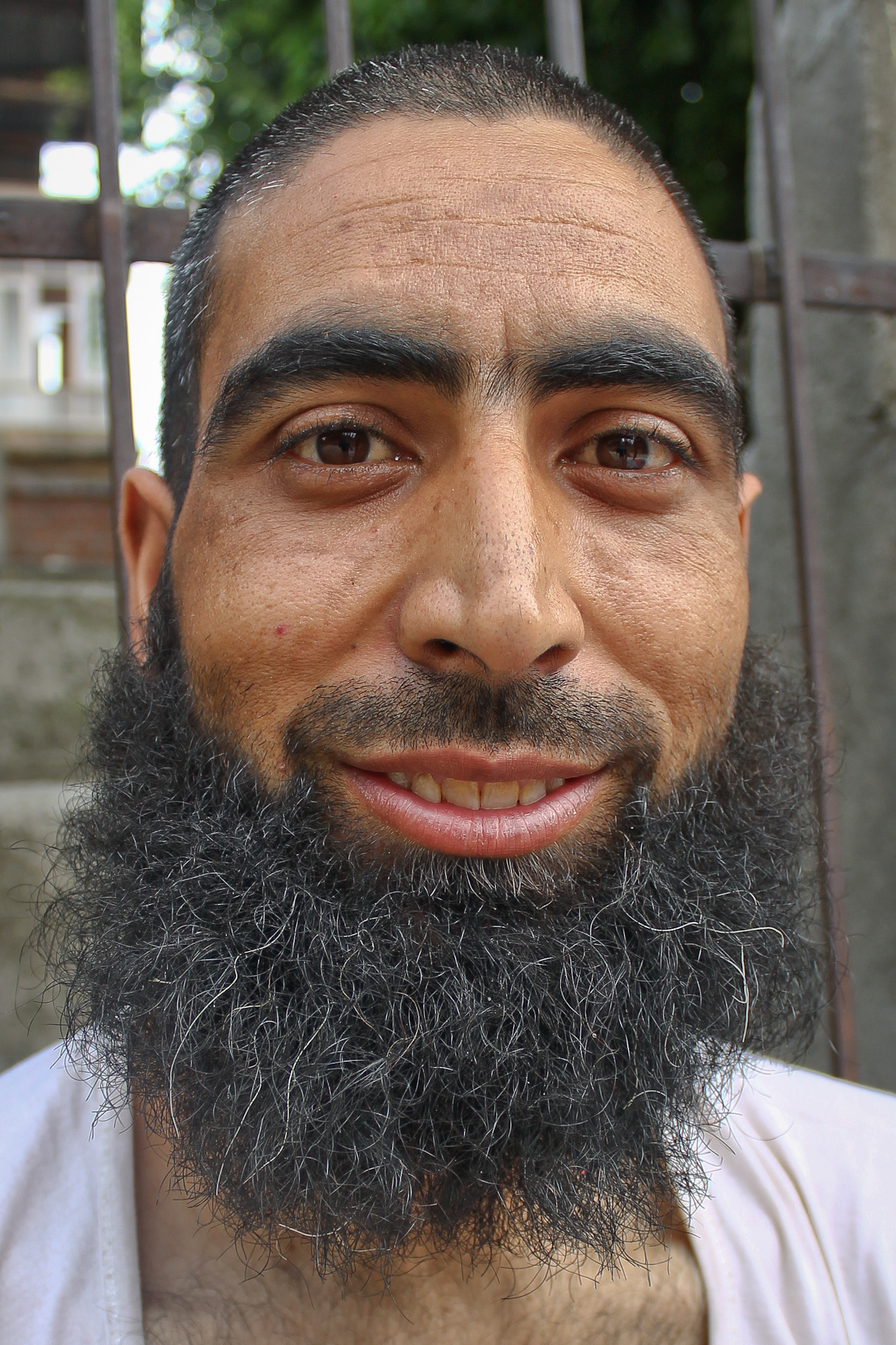 “We are all brothers”

I met the man on the left, in a side-street one day when Nelson and I were walking taking portraits of people on the streets of Srinagar. This young man was stitching a piece of fabric in his lap, when he looked up, as I reached my hand out and greeted him saying, “Salaam alaikum (Peace be upon you)“. He grabs my hand and responds, “Salaam alaikum was Salaam (peace be upon you brother). The young man then held onto my hand a moment longer and asked me in English, “Are you a Muslim?”

I respond, “No, my family is Christian.”

And he then said, “Ahh, we are all brothers, all children…” and nodded his head to the side in acceptance of our mutual being.

Both of us smiling –  and feeling a bit flustered by his forwardness –  he let go of my hand and I walked away mystified… This was not the first time I been asked about my religion, or had talks with others about it. A few people on the streets asked what my religion was, and then listed on their fingers, the commonalities between Christians and Muslims. They would say that before Islam came to “The Valley” some 400 years back, they were all Hindus. Some families converted religions, others didn’t… When talking to Kasmiri’s about religion, I also perceived equal dissatisfaction about fighting between different religions as fighting within them… whether they be Muslim, Hindu or Christian…

“If this is not a religious or ethnic conflict? What is all this then?” 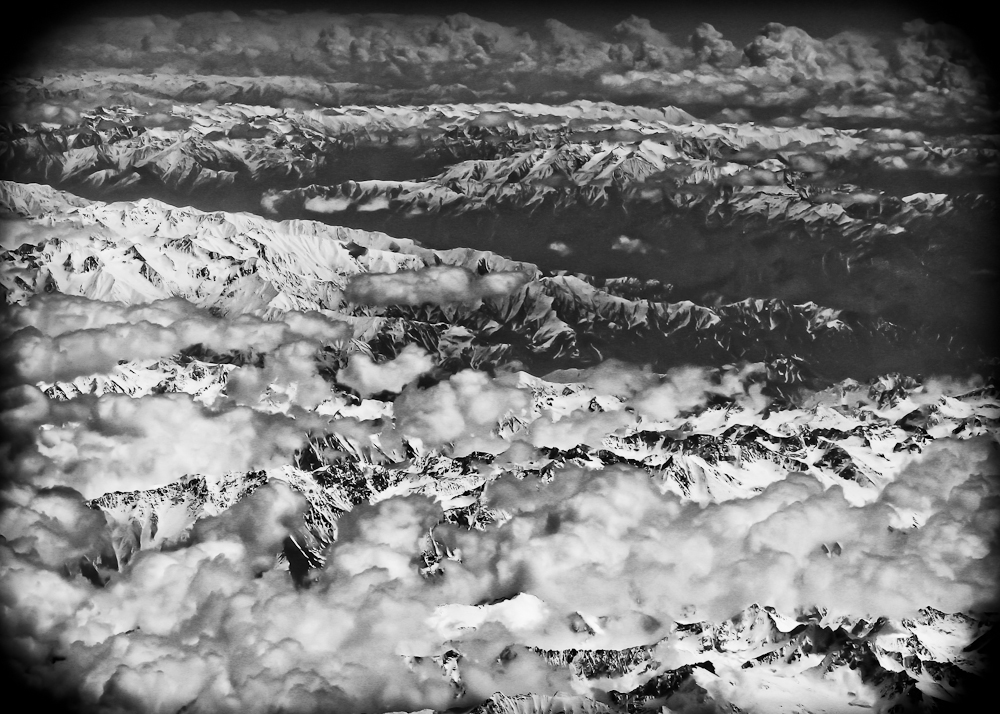 Two summers ago I worked for the Mountain Studies Institute based out of Silverton, Colorado. During my time at MSI I was exposed not only to the intricacies of mountain ecosystems, but the roles they play within the health of human economies and societies. The way water is harvested and stored… the life cycles of forests, minerals, timber, air, living space and agricultural space… And, from what I gathered working with them, and then visiting Kashmir… Is the Himalayan Mountains will be The Crux…

By peeling the pasty-colored political lines off our maps and looking at the entire Himalayan watershed as a single contiguous biome, some 1,500 miles long and 1000 miles wide (including the Tibetan Plateau). We realize the Himalayan Mountains provide 3. 5 Billion people with water, food, fuel, metals, timber, living space, livelihoods and jobs… 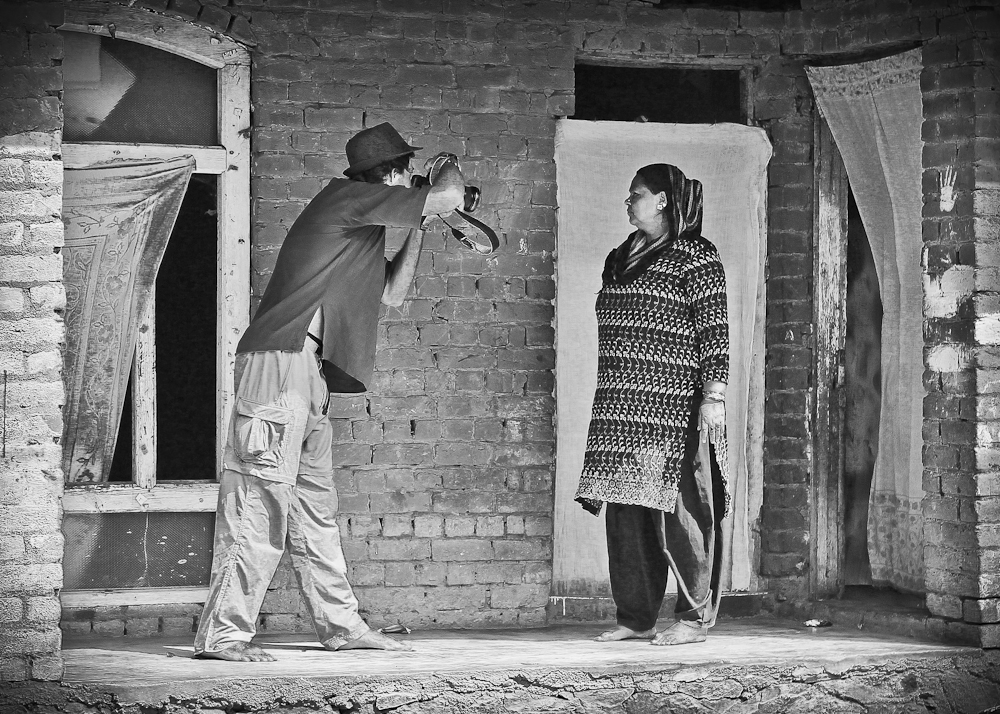 Although there are tensions between the two countries for other reasons, the only thing Pakistan and India have ever shot a bullet over is The Kashmir Valley. 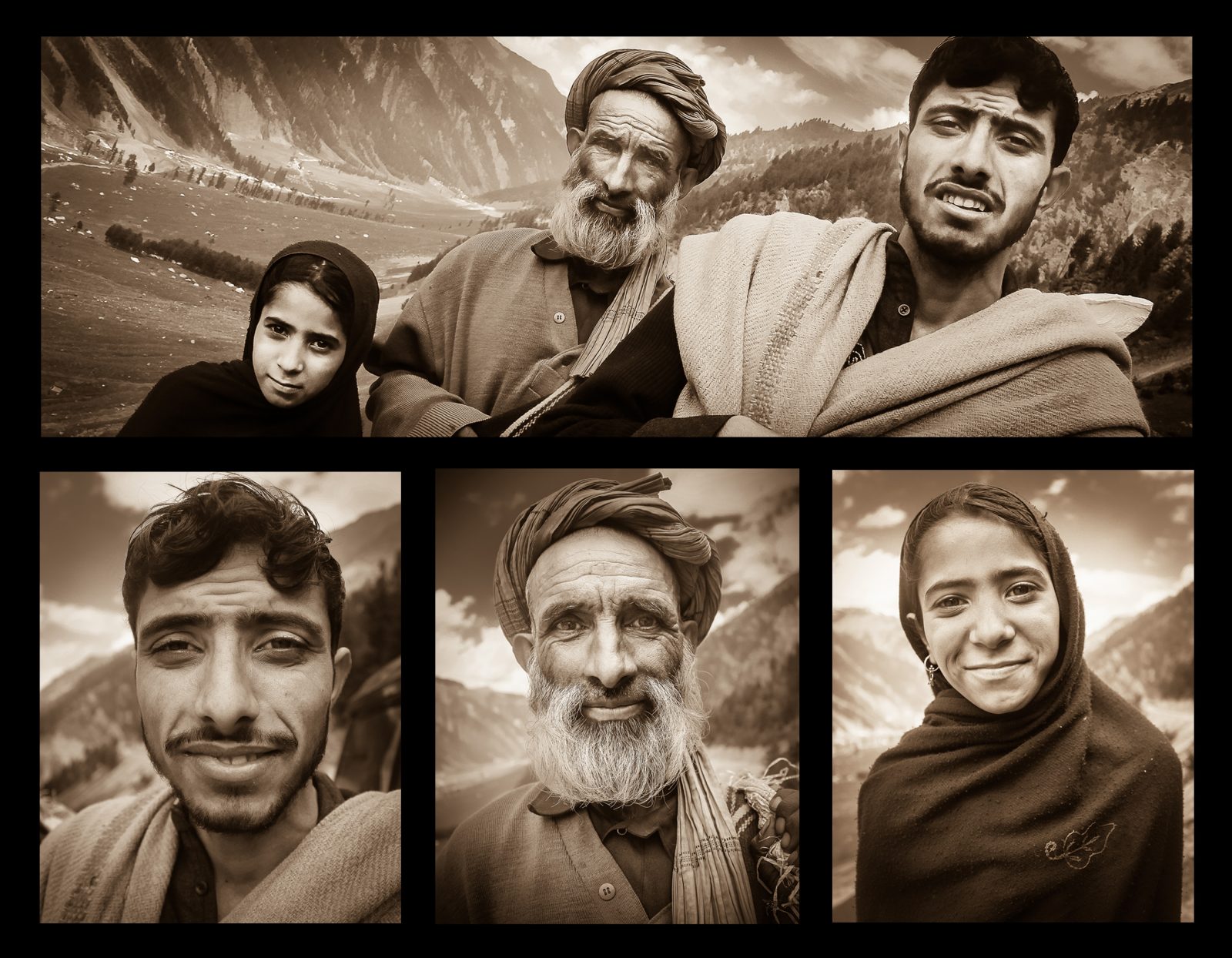 A family of Hitch-hikers pictured individually and together – Amarnath Valley, Kashmir

To me, this is a crazy resource war. If you cut aside the black political vales,  air out the smoke created by cultural differences that are electrified into religious tensions – this valley and the larger region as a whole – is an incredibly intricate and beautifully delicate resource. And, the Kashmiris along with the other indigenous communities that live there, are paying for it with their lives.

Tibet’s boarders stretch some thousand miles to the east of Kashmir. During my stay abroad I also taught English to Tibetan refugees just a day’s drive south of Srinagar, in Dharamsala, India. There are 150,00 Tibetan Refugees in India… Pushed out of their mountainous homeland by the Invasion of Maoist China in 1959. The color of skin we have, our religion, or how hard we work does not make us immune to displacement. This whole region is in many ways… is on fire…

Institutions can do atrocious things… as an American, I know what institutions are capable of. It only takes a brief look into my own American history to see the marbled pillar I was fed, educated, and clothed upon… what my own opportunity has been built upon… the labor of my for-fathers as well as the destruction of Native American peoples, and their land-base here in the Americas.

As a free American I strive to use my liberty to advocate for the liberty of my brothers and sisters at home and abroad… So once again,  I try to focus on that bizarre, wavy glass window that separates the individual people we meet, from the groups of others we talk about, the disassociation between the Indian Army officers I talk to on the streets of Kashmir  and the troops of soldiers who commit war crimes…

One of my favorite musicians, Micheal Franti, created a film documenting his personal journey to Iraq titled, “I know I’m not Alone”. I watched the film a few years ago and was left awe-struck…. In the film, Micheal Franti says, “This film came out of my frustration with watching the nightly news and hearing generals, politicians, and pundits explaining the political and economic cost of the war in the Middle East, without ever mentioning the human cost. I wanted to hear about the war by the people affected by it most: doctors, nurses, poets, artists, soldiers, and my personal favorite, musicians.“ 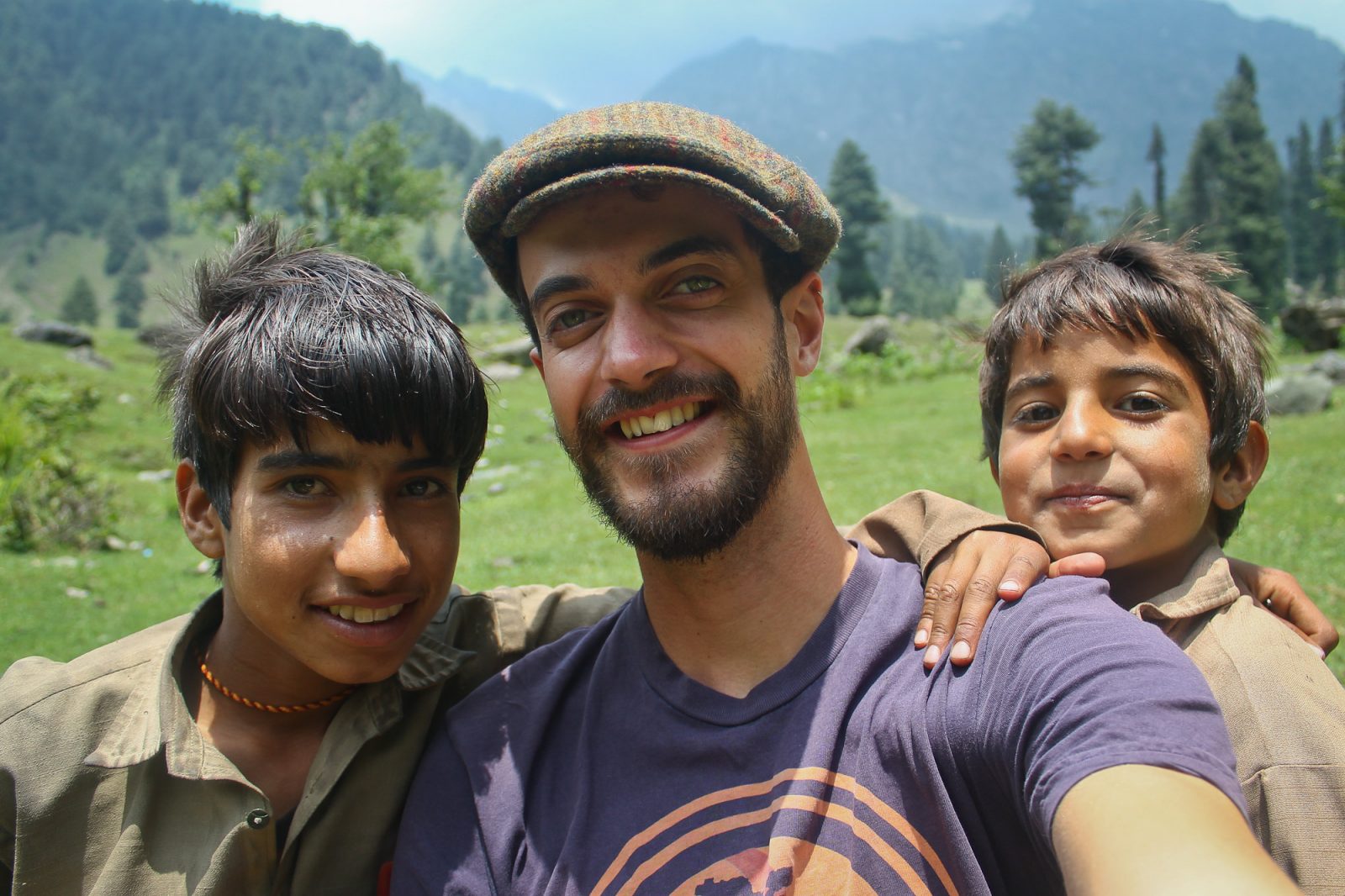 Some friends and myself in Eastern Kashmir

After watching this movie about reaching out as a human-being and seeing the interactions Micheal Franti had, hearing his stories….I was left  deeply inspired by his journey… Franti went to Iraq, Israel and Palestine and played music on the streets of war-torn communities in the Middle-East. He just talk to the people he met there… And touched other peoples lives by asking them what their story was… and connecting with them on the human level.

One of the most profound things I learned from my own experiences in Kashmir, is how careful we need to be in believing what the media, or society, tells us..

And that insight boils down to our own responsibility for our own ignorance… Our opportunity lies in getting out, opening up to others and making ourselves a little uncomfortable. Through being a little uncomfortable and reaching out, we ironically gain deeper understanding of our own personal story… and how it plays into this much bigger story… through experiences like these we realize the daily choices we make, the things we say in our heads about others,  tilts that cosmic scale… 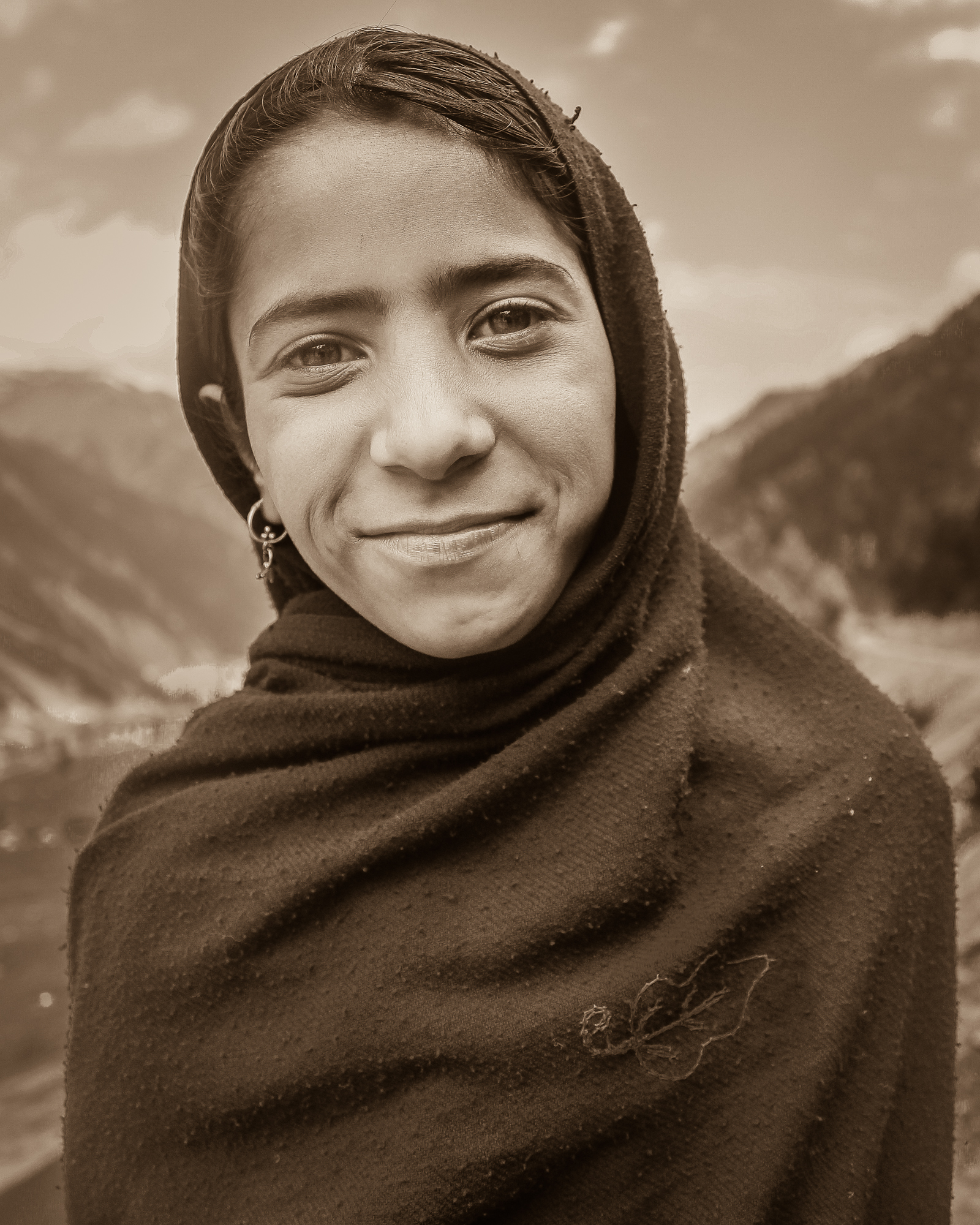 As sentient beings we have the ability to propagate, unfold, and transform the energy we interpret and the energy we transmit…  I feel the struggle in the Himalayas to be The Crux, because if we cannot help resolve this conflict in Paradise, where will we be as  a global-people if this is left unresolved?

As a patriotic American and believer in my own individual contribution, I must say Americans have neither anonymity nor immunity in this conflict. Kashmir’s close neighbors to the North and East (Afghanistan and Pakistan) have been deeply affected by American foreign policies over the last decade.

“What is my nation contributing to the Himalayan region?”

But isn’t a democracy imposed by another, not the democracy you want for your own people?

The world is getting smaller and more populated by the minute… How do we choose to handle that… in theory… in practice… how can we move forward?

What do we do about a perceived global-limitation of earthly resources?

How do we work together and innovate to alleviate this perceived scarcity of our resources?

Do we choose to allow minor differences between cultures separate us,

or the ever evolving commonalities between cultures unite us?

And how do we, as unified global citizens atone and forgive, others as well as ourselves, to reconcile and progress…

How do we offer out open hands in a gesture of oneness and reach together for a future in which our children can peacefully thrive?

These, are just some of the questions I’m left with…

…as I ponder these not-so-far-from-home stories from Kashmir.