The Separatists – The Kashmir Analogs: Part 2 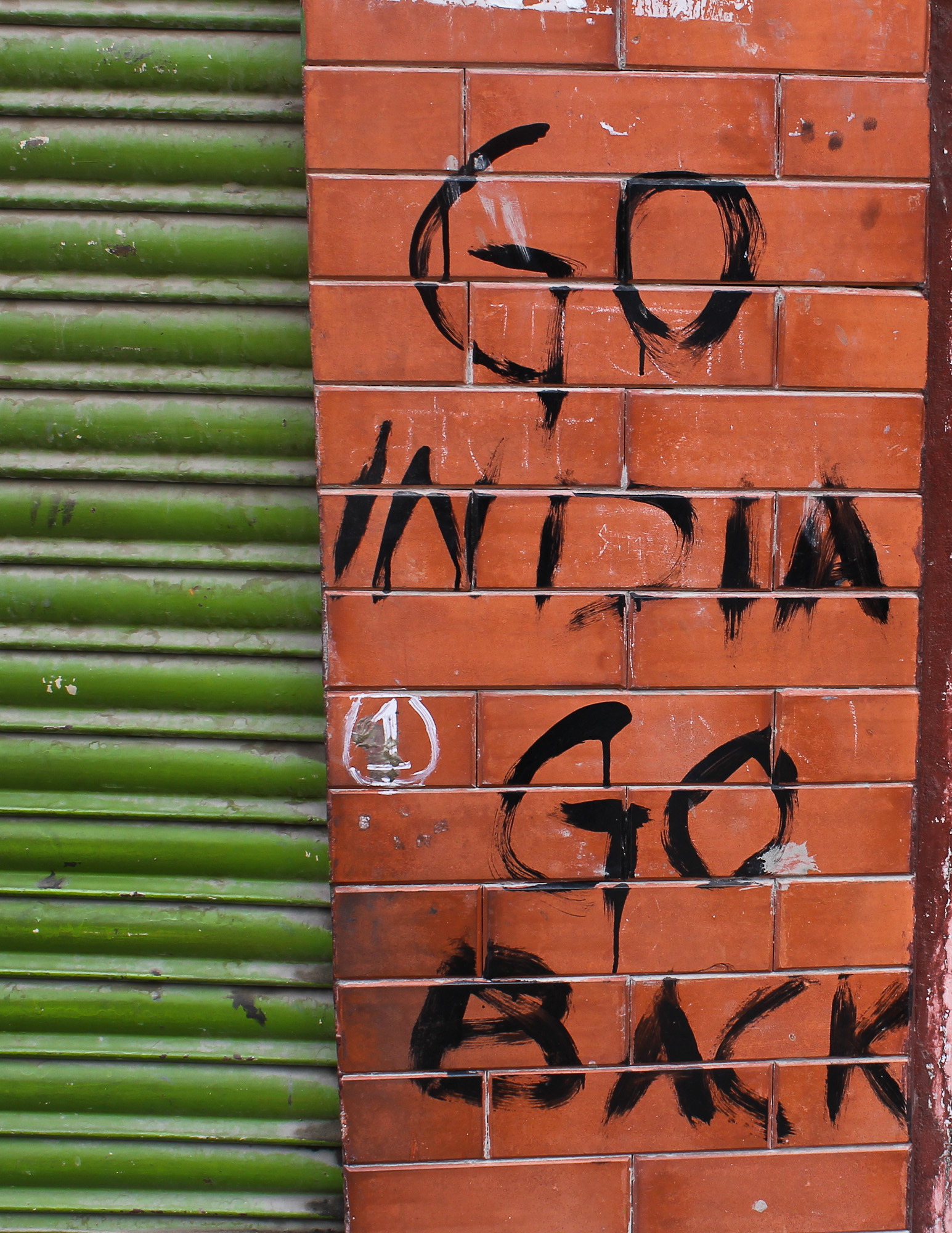 Walking into alleys and side streets of Srinagar revealed a deep dissatisfaction with The Indain paramilitary forces stationed in Kashmir.

At this point in my journey in Northern India and my stay in Kashmir, things started to move fast. It was on our second day in Lal Chowk, Srinagar that we began meeting leaders of different separatist parties in Kashmir. For Nelson’s project, his intention is to meet with people from opposing sides of conflict and photographs them together. Meeting political leaders, was not really ideal, (as it is just one side of the situation and politicians are not what you’d really call “common” or average people… and they may have other interests) but, it’s what our contact set us up with. So, on down the rabbit hole we went…

We were introduced to a contact who was involved in the revolution in the 90’s, but has not been involved in politics since. As we were driving around the historic neighborhoods of Srinagar with him, and connecting with his old circle, it became clear how strongly the Kashmiris want an independent state… and the harsh reality of why. It was here amongst the narrow dirt streets, canals and police checkpoints, that we began getting glimpses of the peoples’ story. 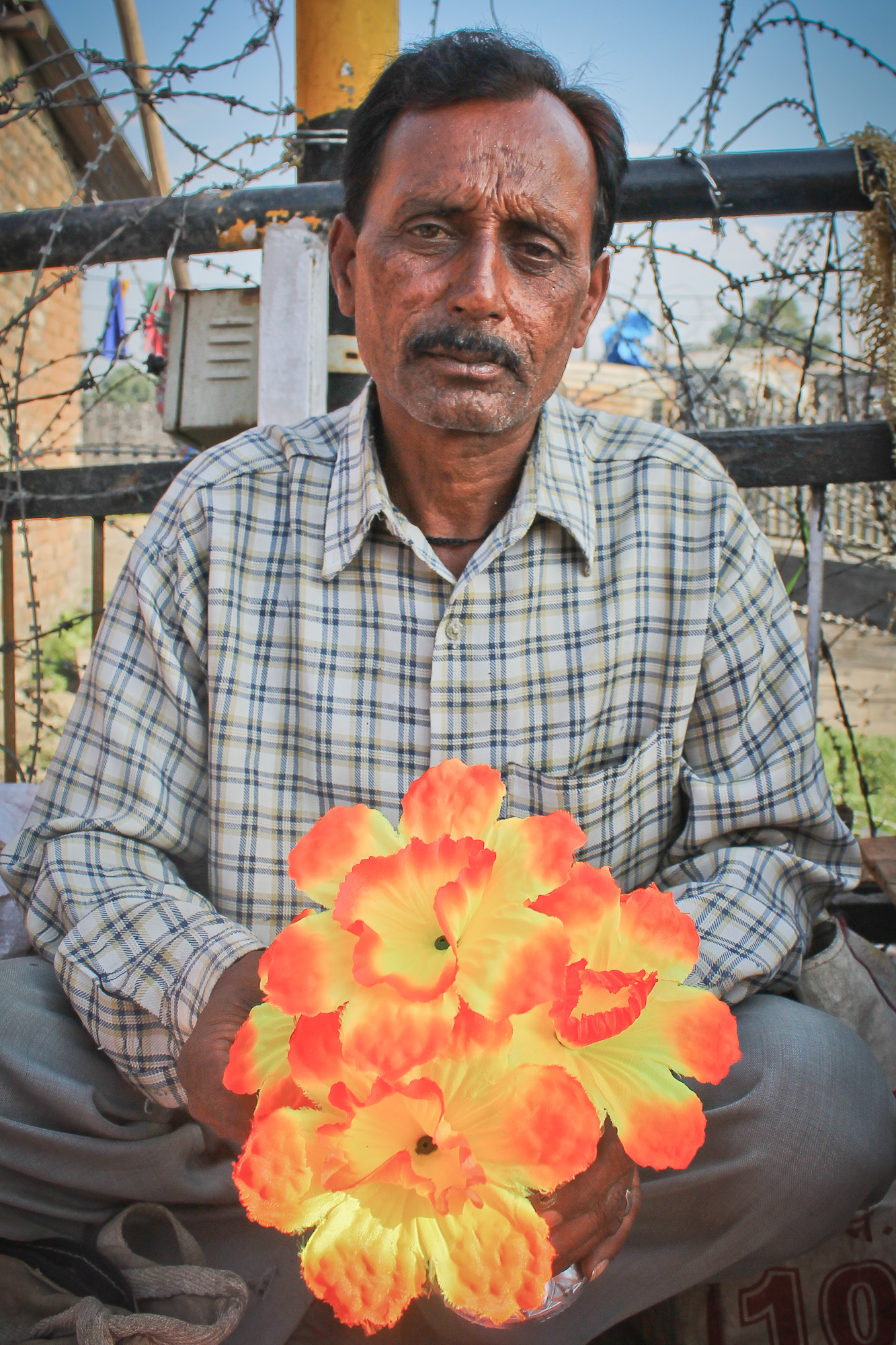 A man selling plastic flowers on a bridge in Srinagar. Back-dropped by razor-wire and to his left is a brick building that houses an Indian official sitting on a 50. machine gun pointed at the street.

Since the Partitioning of British India and the exodus of The British in 1947, the vibrant and diverse Kashmir Valley has been pulled and undercut by other geo-political interests. After the recession of British governance, military forces and economic interests in India all the maps were redrawn…. The Kashmiris identify themselves as unique to either Pakistan or India. In reality they are a beautiful fusion of the two cultures that over the last few thousand years has evolved to become truly its own. After living through three wars between India and Pakistan (47′, 65′, 71′) and thirty years of failed attempts at diplomacy, a revolt took place in 1989. After living through decades of carnage and war… rape, murder and kidnappings, the Kashmiris themselves, “took up the gun”. And I heard them say they did it in defense against both the Indian and Pakistani armies (state-funded or otherwise).  For eight years Kashmiri groups (The Jammu and Kashmir Liberation Front being one…) violently resisted and fought a gorilla war for Kashmirs independence from these two dominating forces… as the men fought, the Kashmiri families, mothers, widows and children were left under curfew…  schools were shut down for 8 months of the year… food markets were dangerous to get to, let alone to find few if any vendors had risked being out on the streets, to show their wares… in other words, this community has been left in constant state of utter disruption since 1947… 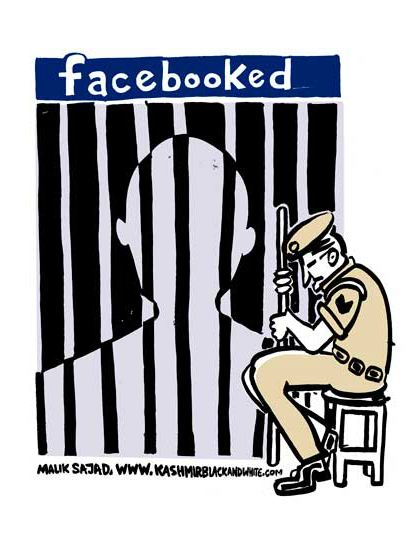 The Kashmiris resistance during the revolt ultimately realized that much more was being lost than gained, and they “put down the gun”…. And after loosing so much…. today  Kashmiri’s continue to pursue the human rights the Indian doesn’t afford them by trying to reach out to the international community. Take a look at this Kashmiri Artists’s webpage to see some amazing graphic art detailing the life of a Kashmiri. I recommend reading his graphic novel Facebooked.

More of his work can be found at: http://kashmirblackandwhite.com/HTMLL/Home.html

Talking to many different people in Kashmir, and from what I saw with my own eyes, is the western half of the international community seems to just stare blankly back at them… I’m left with the feeling that I should use my liberty to advocate fore theirs.

These numbers are hard to digest and hard for me to comprehend but just to give some context, currently there are over 700,000 Indian Army personnel stationed in Kashmir, a state similar in size to my home state of Colorado. Since the partition of India in 1947, 2.5 Million people in the region have been displaced, between 60,000-80,000 people have died as a result of war, and there are 10,000 documented cases of enforced disappearances (military-kidnappings by the Indian Army). 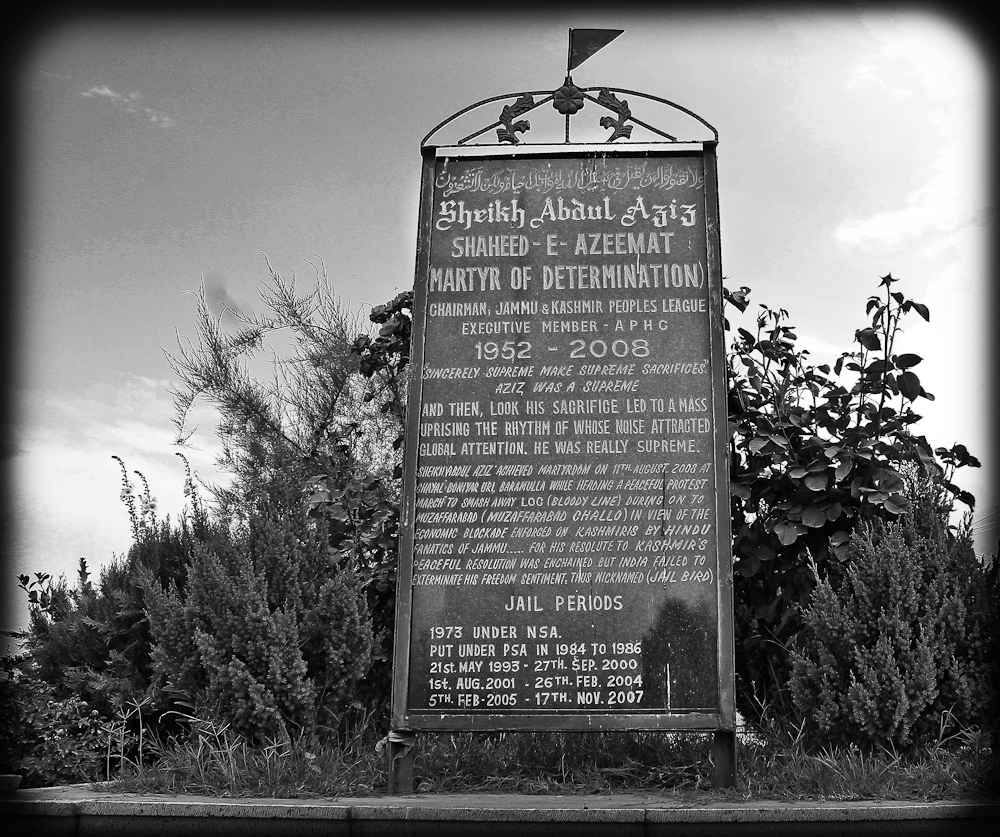 Because of these forsaken numbers, events and loss – when we visited leaders of these Kashmiri resistance groups, we went to their homes because they were under house arrest for their political activities. On one occasion, we drove our small car into a gated compound, and upon entering we saw standing behind the metal gate, two men in street clothes holding sub-machine-guns. After after we entered the compound, the guards peered up and down the street we had just drove down and then closed and barred the heavy gates behind us…  Other times we went to “office” of the political leader. Which was a small apartment style room below the home of the leader (as they were also under house arrest). In these meetings, as per custom, we would sit in a circle on the floor, holding cups of chai, legs crossed (careful never to point your feet at someone) and interview and take photos. 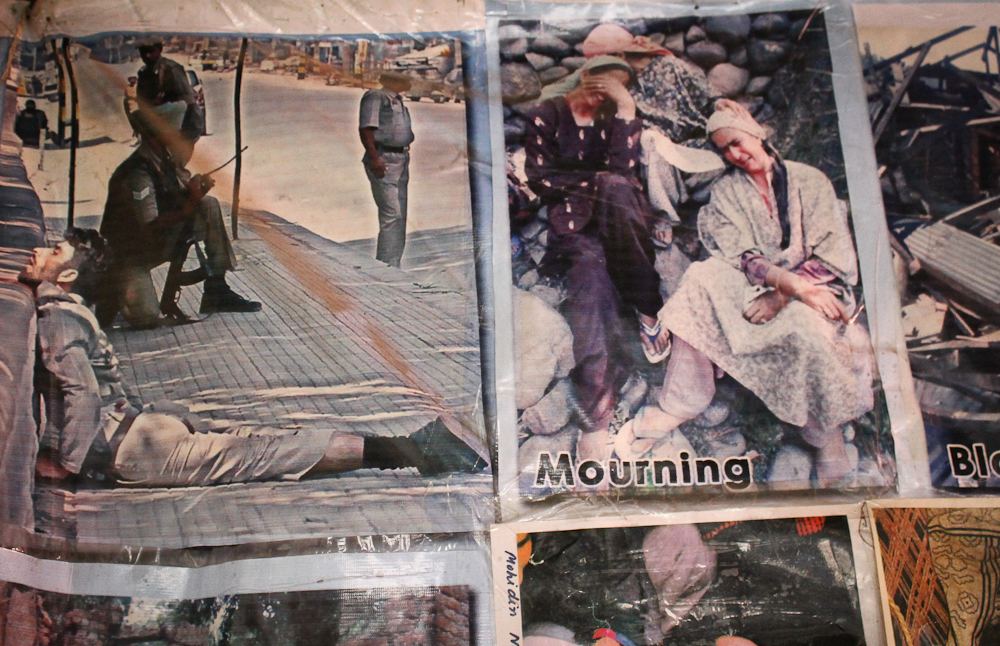 Photograph of a man shot on the streets in Srinagar backdropped by Indian officials.

During these meetings, we tried to keep the topic of conversation around the leaders personal experience and story, but the mood and conversation would usually shift to the mission-statement of the organization and the human rights violations the Indian Army had committed over the past decades… This as well as details about the current dire condition of the Kashmiri people, their economy and of the fractured Kashmiri political scene (I heard a Kashmiri say “there are more leaders in Kashmir than followers…”)

Many of the groups we interviewed were trying to seek media attention. Most saw us as a way to access audiences in the West. Others saw us as a way to save family members that had been kidnapped or were currently in the jail system… and asked for our help…

I remember sitting in one of these offices, on the floor, taking notes and listening intently over my cup of chai while Nelson interviewed a leader – when another man sitting at his side interrupted, looked directly at me and told me to, “write these names down…” He started shouting the names of young boys that had been killed this year. Not knowing what to do I dumbfoundedly tried to write faster and faster. He stopped briefly and abruptly shifted from people killed on the streets, to Kashmiris currently on death-row for political crimes (dissenting against the occupation)… the names went on and on…When he finished speaking I looked down at my shaking hands holding my notebook… glancing at the chicken-scratch writing … the Islamic names he had shouted off …. phonetically spelled out… wondering… if his effort at gaining attention from from the international community – and possibly saving these people lives was going to work… still not knowing what to do, I reached forward sitting above my crossed legs… and took another cracker from the platter set before our circle as I nodded at him in confirmation. 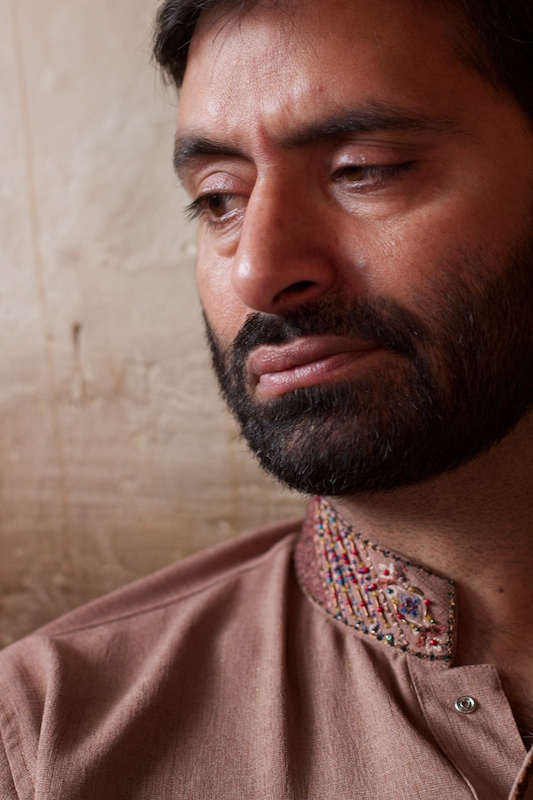 In most of the offices that we visited there were poster sized pictures of civilians marching down the streets waving green banners brandishing political slogans in Arabic script- arms raised and shouting. Amongst these, were dozens of photographs (think 4×6 refridgerator prints) of civilians,  martyrs and political figures that had been jailed or killed… I have many  pictures of these displays on on my hard-drive but they are pretty nauseating… there were entire displays of young boys that had been rioting and shot by the Army in 2008 and 2009… older images of what grenades and full metal jackets do to the flesh of protesters, civilians and children standing nearby… women crying and rubble in the backgrounds. As the images of  broken bodies, severed limbs and the singular blank-pained stares of a youth killed on the street, are burned into my memory banks, I ponder the true cost of freedom… and of oppression…

…I’m still boggled by an analogy that we heard a few times… When talking with some of the leaders they brought up the parallels between the U.S. Revolutionary War (that resulted in the North American Colonies gaining independence from the British in 1776) and the Kashmiri Revolt from 89′-96’… Although different situations, the analogy was this: “What would North America look like today, if the revolutionaries – ‘your founding forefathers’, had fought for twice as long and sacrificed twice as much only to be forced back into submission of foreign rule? 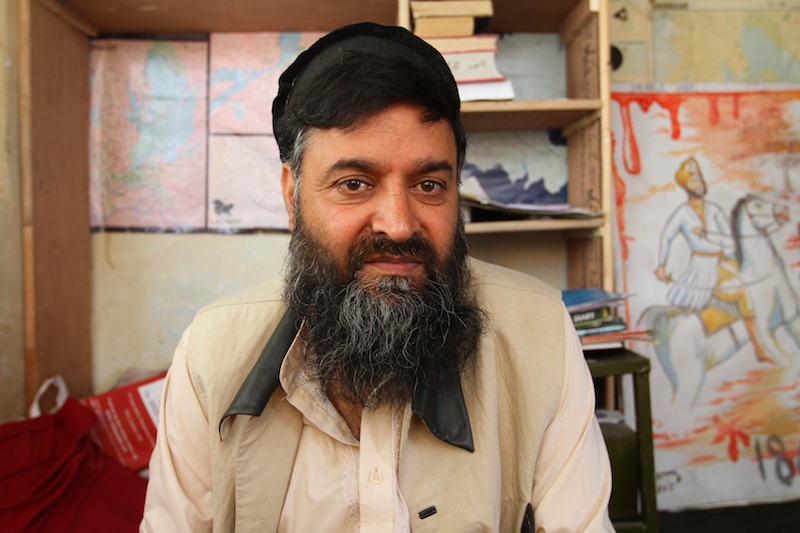 The  man to the right is Shakeel Bakshi. This was my favorite interview from our work there. Shakeel, Nelson and I had a great discussion about peaceful resistance and devoting your heart, your life and sacrificing everything in hopes of a better tomorrow for your community.  It was in this office that I learned what it means when your ideals become your practice… to the ultimate… what an amazingly grounded person to meet a midst all this chaos.

But all this was just one portion of the story. And, ultimately one of the most confusing parts of it…  We met with about eight different separatist groups, and from all the different perspectives and interests we heard, it all didn’t quite add up… we got a fractured cross-section… an incomplete and swayed narrative of the Kashmiri people… this narrative was filled with back entrances and trap doors, concealed handshakes and openly pointed fingers. Although it easy to see this was a struggle from hell for freedom – finding truth in any political circle seems to be like searching for the “Exit” sign in Pans Labyrinth… let alone this one… too much diffraction and woundedness and special interest involved to really get a clear picture. But the confusion this situation generates, also seems to be  part of Kashmir’s story nonetheless. 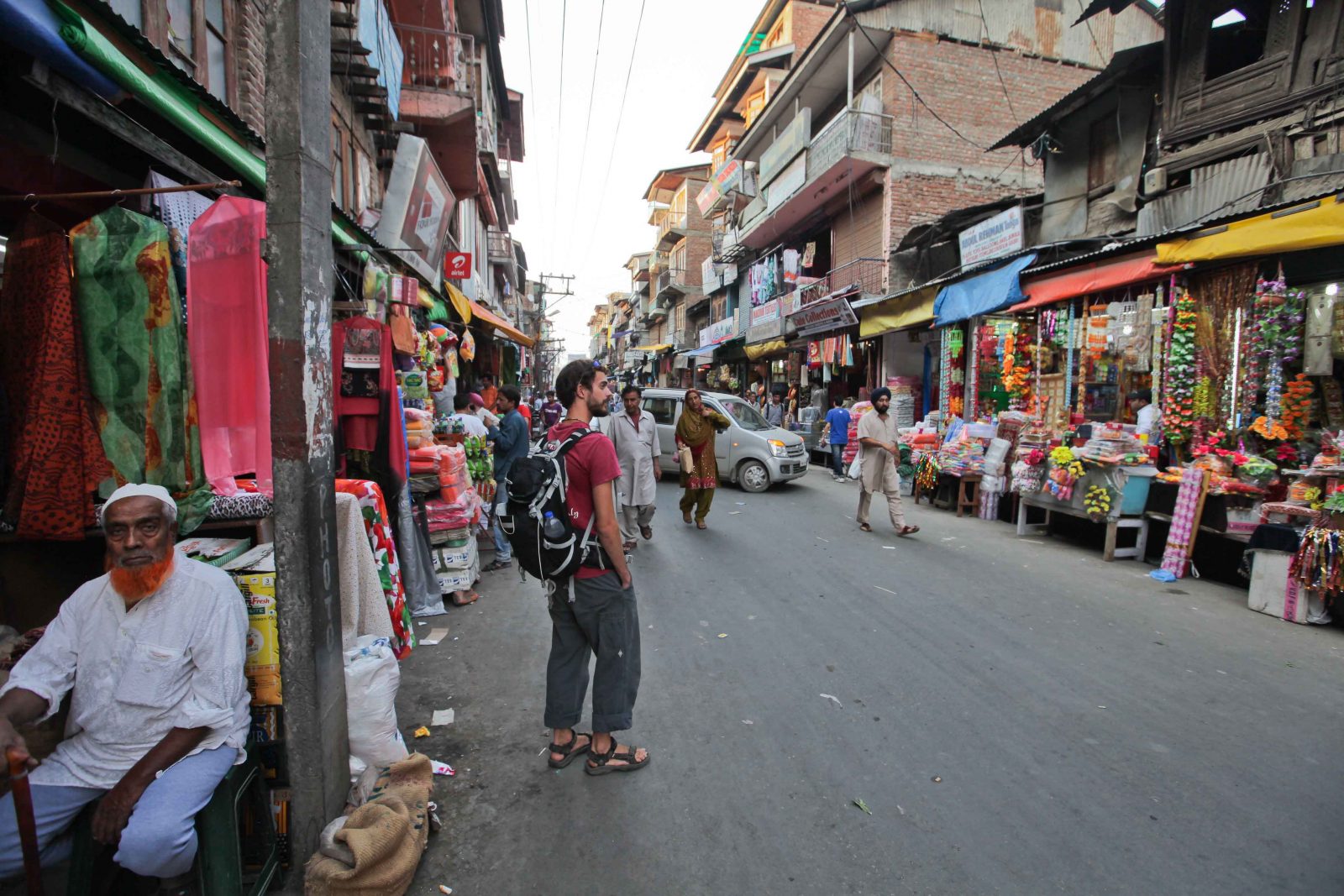 – A photo of myself captivated by the vibrant markets of Srinagar, Kashmir –

Finding these meeting ultimately bitter and resentful of the Indian Occupation of Kashmir, and in hopes of meeting people from opposing sides of this conflict we could photograph together for the Enemies Project – we started walking around the dusty city, fragrant alley markets and  congested side-streets to meet the common people in Srinagar. This was just as interesting of an exercise… and what I found most profound, was the opinion of the Kashmiri women. Once we could get it…

The People – The Kashmir Analogs Part 3 will be released sometime next week,