After a pretty thrilling 12 hour taxi ride through the Himalayan passes, we made it from Mcleod Ganj to Srinagar, Kashmir. We spent the entire day driving through very diverse and desolate landscapes.  We started by driving the through military checkpoints in the dry Punjab basin and without incident made it to a rocky and desolate landscape reminiscent of Southern New Mexico. It also happened to be on the summer solstice (and a 115 degree heat), but luckily within a few hours we made it to the cooler pine covered foothills. Then we began climbing up through the winding and switchbacked double lane highway swamped with colorful Tata goods carrier trucks, military Humvees, taxis full of Indian tourists, buses loaded to the brim with people (literally people sitting on the roofs), motorcycles and the occasional sheep herder funneling his flock across the highway.

The overall feeling of the drive up to Srinagar is what I would amount to spending 7 hours on Red Mountain Pass while our taxi driver performed a sort of hair raising dance of honking, punching the gas, overtaking a goods carrier loaded down with vegetables on a blind corner with no guard rails – only to narrowly make it back into our lane as another truck loaded with people screams by. And, before I have time to let the cramp in my right leg relax from hammering the imaginary break under my foot, the driver nails the horn and hits the accelerator again.

As we made it farther north and through the small hill-station towns, the beautiful Arabic script began dominating the signs above shops. Men wearing white cotton shirts, long beards, and small round wool caps were talking next to rickety tea stalls while women wearing elegant shawls covering their heads (and a few in full face covering Burkas) were bustling around the towns trading in the early evening.

After crossing few more lazy military chekpoints, we finally made it up to the last pass, through a 5 km long tunnel and into the Kashmiri valley… Before descending, we asked the taxi driver to stop… The Kashmiri valley in the early summer is the true essence of the color green. It’s hard to find an analogy… standing in there in the cool evening air and looking down into the flat valley floor covered in an organic matrix of terraced rice fields dotted with poplar trees reflecting the evening light, the shaded fruit orchards scattered amongst the pine covered hills and the snow-capped Himalayan peaks standing sentry off in the distance… Honestly one of the most beautiful places I’ve ever seen let alone heard of.

We drove for another two hours through the valley before we came to the bustling capitol city of Srinagar. After 14 hours of driving, we made it to our hotel and crashed for the night.

Srinagar has a 5,500 year history and has been a crossroad between the Middle East, India, and the rest of Asia. The city of 100,000 people sits in the middle of an enormous lake creating a garden of buildings, floating houseboats, bridges, roads and boardwalks that transect the city. Eighty percent of Kashmiris are peaceful Sufi Muslims and most of the people’s lives are centered around trading the valleys world-renowned seasonal food and spice crops as well as crafted goods during the short summer season… Goes without saying, the fresh food markets here are awesome… And, from what we have learned and experienced by talking with the locals here, the Kashmiris are people of strong handshakes and big smiles, hospitality and genuine care. A truly unique and amazing place. 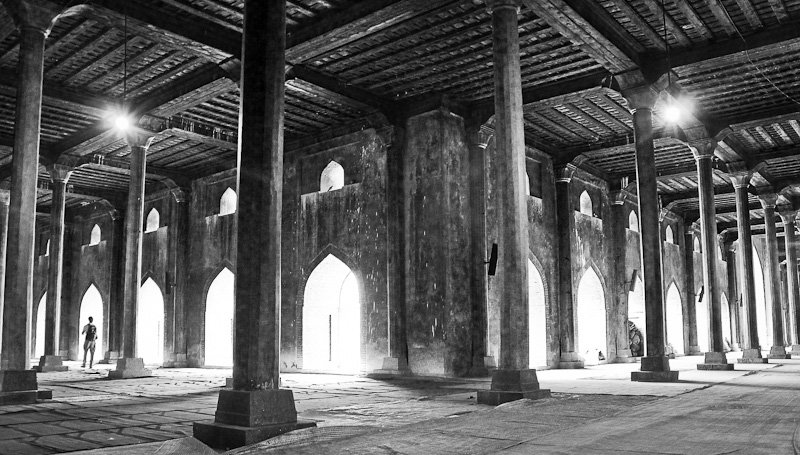 Photo – The 13th century Jamia Masjid Mosque can hold up to 30,000 devotees. (Nelson is in the right corner)

Although Kashmir is truly Paradise on earth, it has also been suffering a wildly-complex conflict for the last 64 years… the surface of the lake in Srinigar is peacefully still as it reflects the evening light, but the lake itself is deep and the whirling currents underneath are strong… A local said that it is true that Kashmir is Paradise, but every day it burns…

We were advised to spend today in our hotel as there is a general strike and emotions are running high. Yesterday morning a revered shrine caught fire and burned down while crowds of people helplessly watched. The people are very sad here as the shrine shared ties with many different religions and was frequently visited by many many people here.

check out this article for more info…

I will try to update more photos soon but the bandwidth is pretty slow.

Talk to you soon,