Thought I would give another update on how things are going… It has definitely been an interesting change of pace for the last week. Now that Nelson has arrived, I have been helping him get connected in different places around town and helping him find people to photograph for the Enemies Project. Most of our time during the day is spent calling people and organizing different meetings throughout town for interviews and photos. This week we have spent a bit of time at the ex-political prisoner association called Gu Chu Sum (literally translates to the numbers 10, 9 and 3 or the months of the year in 1988 where there were mass protests in Tibet that the Chinese brutally suppressed).

We interviewed and photographed two ex-prisoners at Gu Chu Sum which was a really interesting process. They had some wild wild stories… A political prisoner is a person that is prosecuted for dissenting or questioning those in power (they commited no “crime” other than speaking out against the government) . Free speech and freedom of expression is not something that has not existed in Tibet since the Chinese invasion in 1959. So for over 60 years now the Tibetan population has had to succumb to the oppressive and extractive policies of the Chinese with no avenues to even state their own oppinions.

Both of the people we interviewed had even met each other in a Chinese Prison called Drapchi some 15-20 years ago. And, both of them were thrown in jail for publicly stating their dissent of the Chinese gov’t…. they did nothing else but state their dissatisfaction with how the Chinese were treating their people.

There are eight staffmembers at Gu Chu Sum that run services as well as international outreach about the brutal policies of the Chinese. And of those eigh staff, seven of them were political prisoners in Tibet and fled to India upon release.

The Image below is of Nelson photographing one of the ex-political prisoners named Lobsang. We were taking the photo in Gu Chu Sum’s library where they had dozens and dozens of photographs and stories documenting the human rights abuses by the Chinese in Tibet. In the right of the image you can see of the devices the Chines use to interrogate and demoralize prisoners (electric batons, and and assortment of deranged blades etc…) In the background are photos of people that were brutalized or killed at the demonstrations in the late 80’s and in the 2008 protests during the Olympics in Beijing. 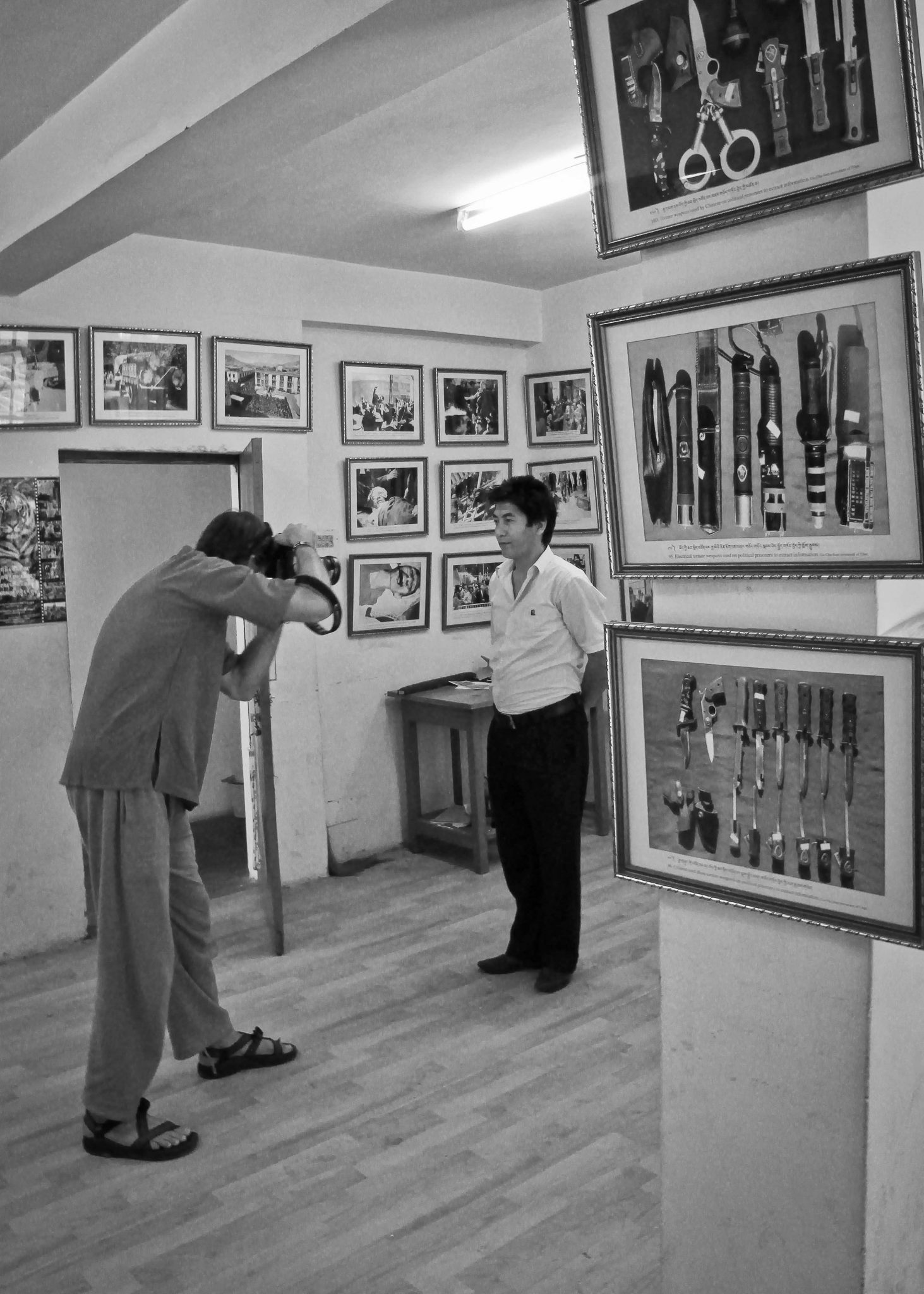 Pretty amazing stories for sure…We have also been working with the Tibetan Youth Congress, Tibetan Wemons Association, and Students for a Free Tibet. Now we are talking with some friends we made here to find more laypeople/average citizens to interview.

On a lighter note me and Nelson have been taking lots of photos and fun video around town. It is really interesting traveling with a professional artist. Nelson has a really unique way of both viewing the world and interacting with it. In just the few days we have spent so much time crusing around with cameras and light video equipment talking to people and taking photos. In just the last week my technique and understanding of photo and video media has expanded. And my confidence in taking pictures of people.

Here are a few of my photos as well… 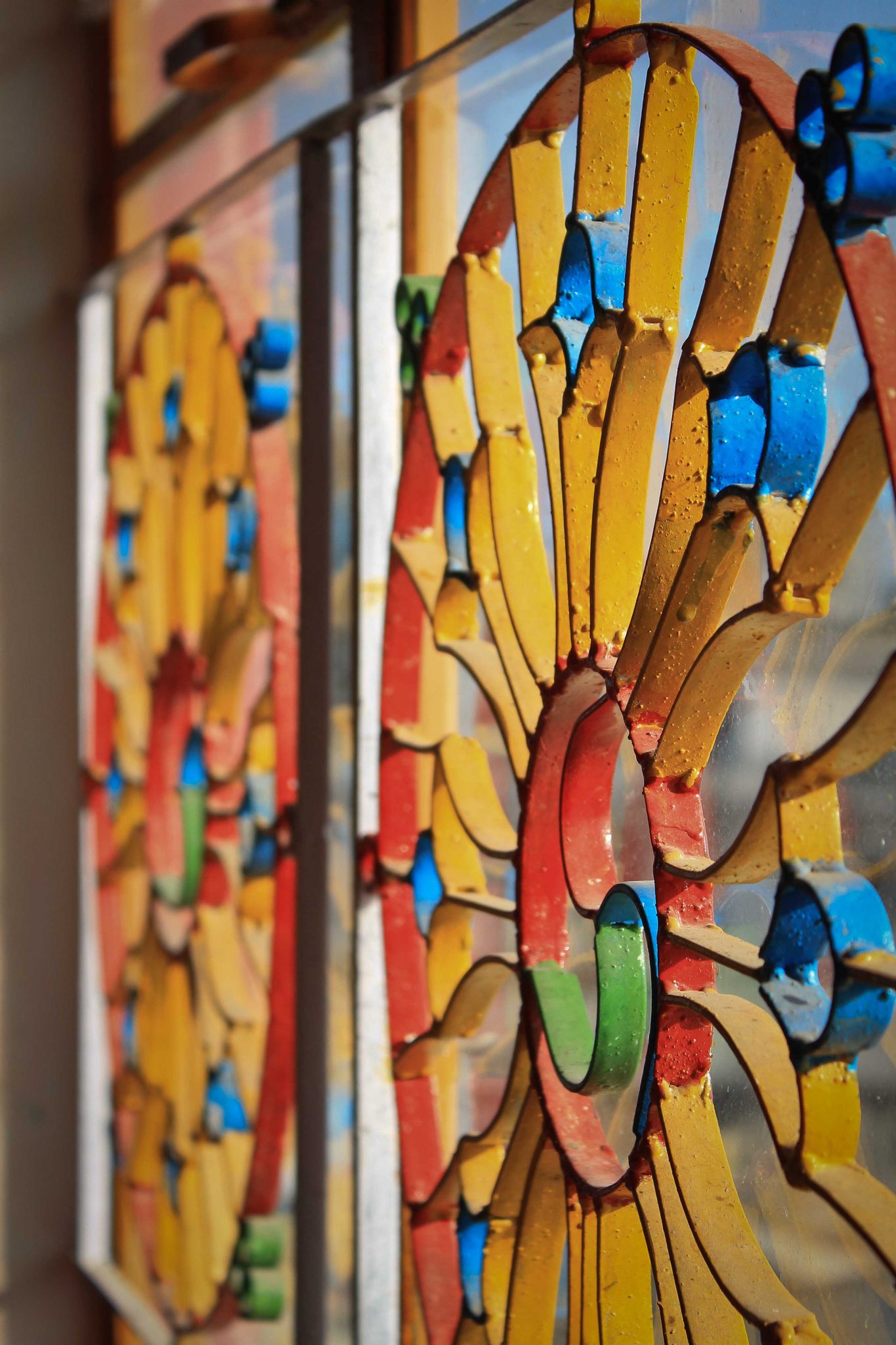 Above is a window in one of the beautiful buddhist temples in town. 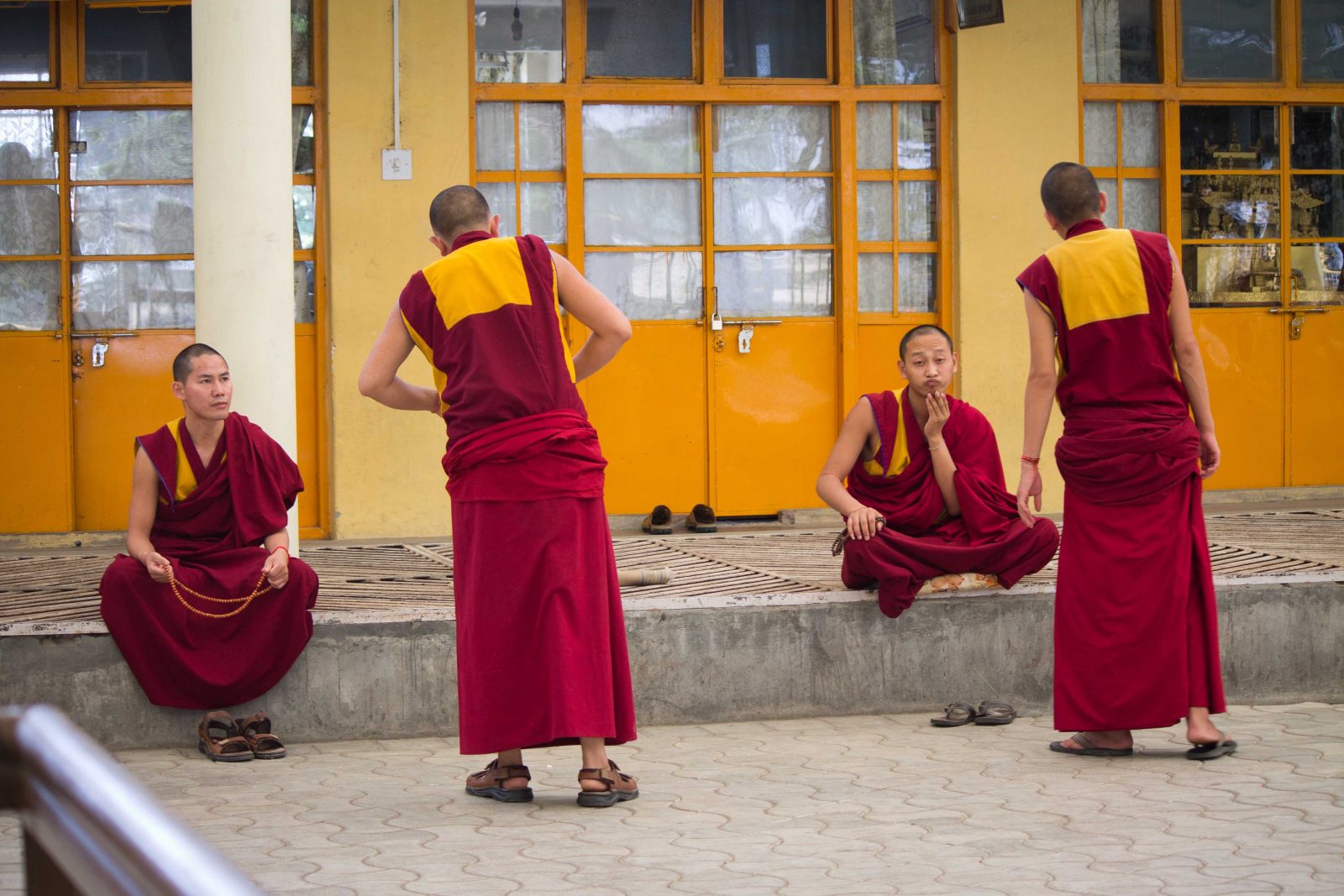 Monks debating in the courtyard of the Dalai Lamas Temple. Debate has long been one of the ways Buddhist monks and scholars critique and challenge their minds to come to more meaningful realities and perceptions. Some shcools debate between 2-3 hours a day.  I wish we could have understood what they were debating…. 😉 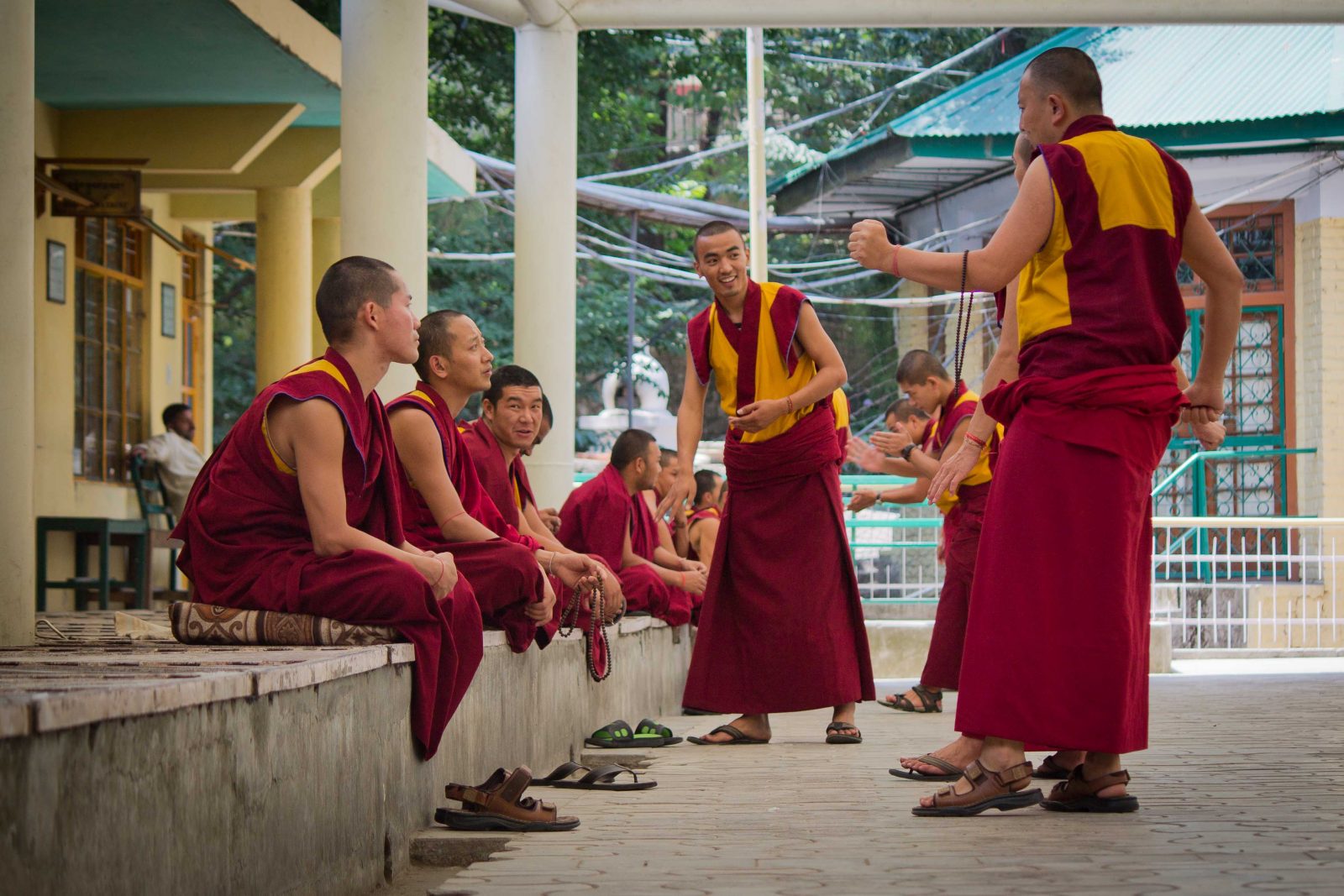 Some of the guys were really animated… One of our friends who is a monk said debate is like exercise for monks ha ha ha. 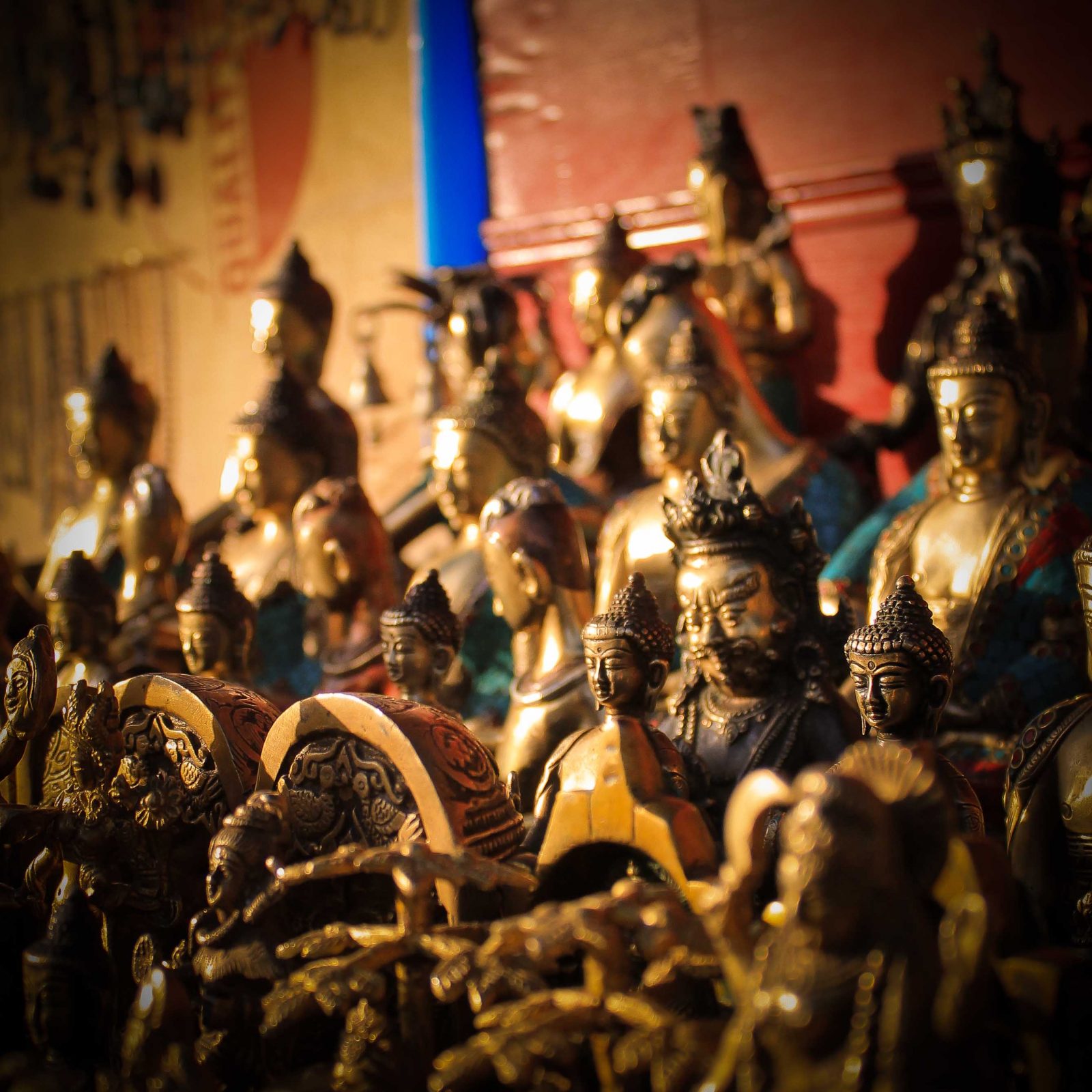 Some brass Buddhas at the market one afternoon… 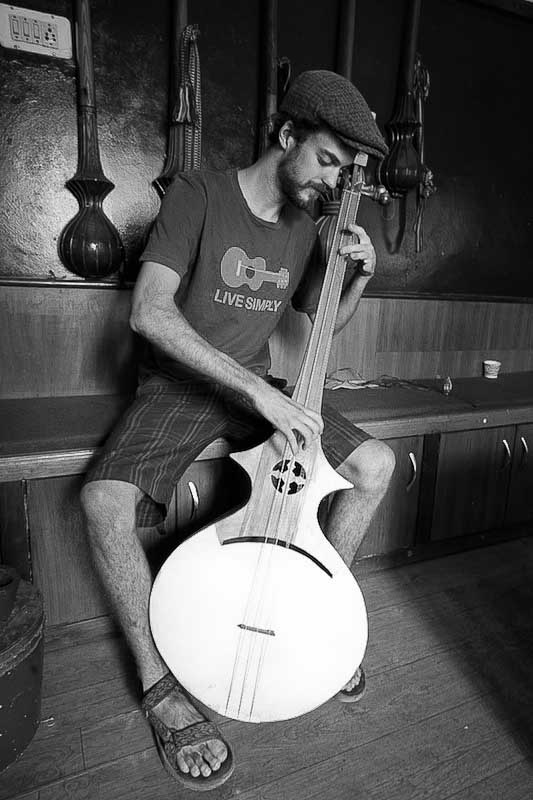 Here is a pic nelson took of me up at the Tibetan Institute of Performing Arts. One of our friends gave us a tour. He let me jam on a wicked pumpkin bass – aka Tibetan Bass Danyen….Soo nice….

Not sure If I will get another blog in or not before we leave. Internet up in Srinigar, Kashmir may be pretty good but I’m not sure so I will try to keep you posted. Nelson has an Iphone so he has been sending out updates much more frequently. Subscribe to his blog and check his facebook for more frequent updates…